The responsible management of our operation’s water balance is imperative today and will be even more so in the future. As an industrial consumer of water from the Athabasca River, it is integral to understand stakeholder concerns, ecological impacts and business risks associated with water withdrawal, storage, use and eventual return. 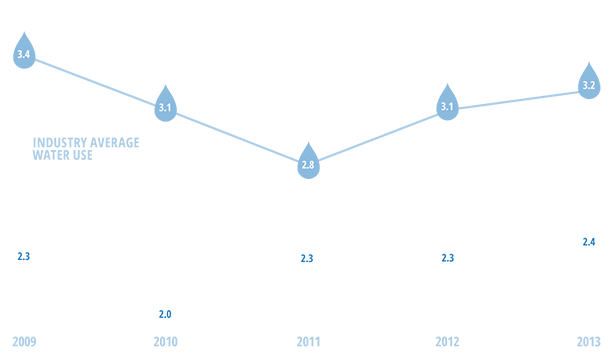 While we have always stayed well below our licensed withdrawal limit, we must continue to focus on innovative technology development and process improvements that will minimize our impact on the Athabasca River watershed. This means reducing our water use and developing new technologies to ensure we responsibly manage the resource and its return to the environment.

A long-term strategy is being developed that will reduce water containment on our site and reduce the import of fresh water for our operations. We did not meet our water use target for 2014 due to reliability issues. 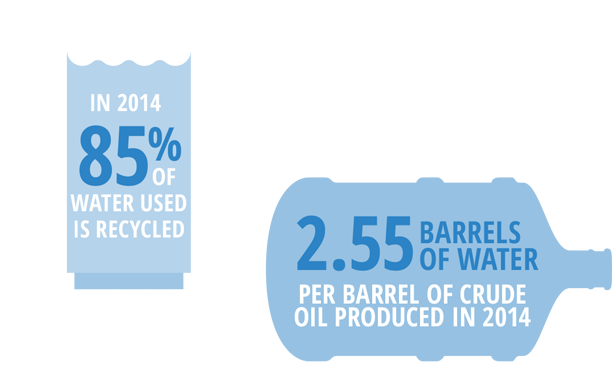 We recognize stakeholders are concerned about the impact of oil sands development on both the footprint and health of the Lower Athabasca watershed. While water is essential to Syncrude’s operation and plays a key role in our production processes, it is a limited resource that we aim to manage responsibly. Our water management practices are based on the objectives of minimizing the withdrawal of fresh water from the watershed, maximizing reuse of process-affected water, and effectively managing its storage. This includes taking prudent steps to ensure no ecological impact on local water bodies, creeks or rivers, and to develop scientifically sound treatment methods, which allow us to return water stored on our site safely back to the environment.

The Athabasca River is our main source of fresh water, providing on average 15 per cent of our total water needs. This water is used to cool process water and generate steam, and for potable water. The Athabasca River remains one of the least utilized rivers in Alberta, with less than five per cent of the average annual flow currently allocated for industrial use. While oil sands mining operations are allocated around two per cent, current total use is actually less than one per cent. Syncrude uses about 0.2 per cent of the average flow, or about 18 hours of total yearly flow, and 0.5 per cent of winter flow.

Our settling basins, or tailings ponds, are the source of our recycled water which is used in the bitumen extraction process. Of the total water used in 2014, 85 per cent was recycled from these sources. As per regulation, water, such as rain and snowmelt runoff, that comes in contact with our mining area is collected and routed into our tailings facilities for storage and use in our recycle water system.

Fresh water is also diverted from the Beaver Creek Reservoir for the water-capped tailings reclamation project underway in our former West mine. To offset this diversion, we fund the Alberta Conservation Association’s work to protect and enhance the riparian zone and streambed of the Owl River, near Lac La Biche. The offset constitutes compensation, as per our Fisheries Act approval, for Harmful Alteration, Disruption or Destruction of fisheries habitat (known as HADD).

Stakeholders are concerned regarding our current use of water and the long-term storage of process-affected water. We recognize further water efficiency gains must be achieved. A team sponsored by Syncrude’s executive has been established to identify and implement viable opportunities to reduce, re-use and recycle water over the upcoming years. Projects with the potential to reduce water use and storage by at least four million cubic metres annually have been identified for implementation between now and 2017.

Actions are already underway. For example, the Syncrude Emissions Reduction Project, which started operation in late 2013, is reusing about one million cubic metres annually of water from the reverse osmosis units in our water treatment plant. The project would have otherwise required fresh water drawn from the Athabasca River.

Syncrude and Industry Water Use:

Releases to the Environment

Alberta Environment prohibits the release of any water that does not meet quality regulations. Syncrude does not discharge process-affected water, industrial waste water or any runoff into local water bodies. The only discharges to the Athabasca River are treated sanitary sewage similar to that from municipalities, clean surface water and aquifer water from the Aurora mine to Stanley Creek, and clean surface water from a gravel pit. All discharges are tested to ensure they meet quality regulations.

It is necessary to build a final reclaimed landscape with a hydrology that connects seamlessly to the surrounding environment. Towards this, we have conducted research on tailings water treatment using petroleum coke, a byproduct of our process. The treatment is similar to using a home water filter. The coke, which is almost pure carbon, acts as a filter that captures contaminants, including naphthenic acids. Bench-scale research shows the treated water is able to support aquatic life. We are running a pilot-scale plant to assess treatment efficiency, answer further technical questions and provide the design requirements for possible commercial-scale implementation and return of water to the environment. Further information on this project can be found in our 2010-11 Sustainability Report.

The Royal Society of Canada commissioned in 2010 an Expert Panel of Canadian Scientists to review and assess evidence relating to perceived environmental impacts of the oil sands, including the regional water supply. According to their assessment, current evidence does not suggest a threat to the viability of the regional aquatic ecosystem. Neighbouring Aboriginal communities, however, remain concerned about downstream impacts.

To help address these concerns, the Alberta and Canadian governments announced in 2012 a joint implementation plan for integrated environmental monitoring in the oil sands region. The plan builds on monitoring already in place and outlines a phased, adaptive implementation approach to monitoring over the next three years. Syncrude supports this credible, transparent and science-based approach, which can guide us effectively on responsible water management in the future.

Fresh water withdrawal and use reported here is for production use only. The Sandhill Fen watershed research project diverted 0.002 Mm3 of fresh water in 2014 from the Athabasca River. Under regulatory approval, an additional 6.56 Mm3 was diverted from Beaver Creek Reservoir for the Base Mine Lake project.