Both stakeholders and regulators have expressed concerns regarding the growth of tailings volumes and potential legacy concerns if left unaddressed. The industry takes our responsibility seriously and Syncrude is pursuing a strategy, based on decades of research and development, which aims to reduce our storage volumes and reincorporate tailings into a healthy, productive reclaimed landscape.

Construction and implementation of new tailings treatment technologies worth about $3 billion are helping us towards meeting stakeholder expectations and regulatory commitments.

We surpassed our fines capture target at Mildred Lake and achieved our best ever annual fines capture. Our target for the Aurora operation was not met due to the extended commissioning of a new tailings treatment plant. 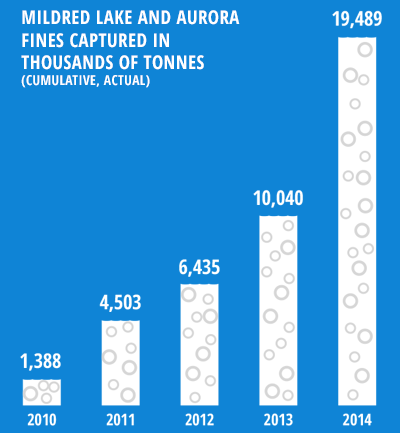 Tailings ponds are necessary to our mining operation as they enable us to store and reuse water. However, while they foster reduced withdrawals of fresh water, they also create a potential long-term liability because of the volume of tailings stored on our site that must be managed responsibly and cost-effectively. Given this, tailings management is among the most critical issues facing Syncrude today.

Stakeholders have raised concerns regarding the integrity of our tailings operations, the growth of tailings volumes and the pace of reclamation. Toward improved outcomes, we have established an executive-led steering committee which meets monthly to steward our regulatory commitments and develop strategies to accelerate the reduction of accumulated fluid fine tailings (FFT) and their reclamation. We also continue to share knowledge and actively work with industry partners and the scientific community towards further solutions.

Our strategy to reduce and reclaim tailings currently incorporates three technologies – centrifuged tails, composite tails and water capping – which will enable us to meet the long-term intent of the Alberta Energy Regulator’s Directive 074. This 2009 Directive sets out requirements and criteria for the reduction of fluid tailings and the formation of trafficable deposits.

In early 2015, Directive 074 was suspended pending analysis by the Alberta Energy Regulator (AER) of the new Tailings Management Framework for Mineable Athabasca Oil Sands (TMF) issued by the Government of Alberta. Syncrude continues to work towards managing our tailings as expected by Albertans and is committed to achieving future targets as determined by the regulator. Visit the AER website for more information.

To learn more about tailings and our storage management infrastructure, visit our website.

As a member of the Mining Association of Canada (MAC), Syncrude participates in the Towards Sustainable Mining (TSM)initiative which outlines best practices in areas such as tailings management. Internal assessments are required annually, with an independent verification every three years. These results are reported at the MAC website. Our 2013 assessment was externally reviewed, verifying that we have a formal policy in place, developed and implemented a tailings management system, assigned senior accountability, and developed operations, maintenance and surveillance manuals for all tailings areas. Annual reviews are also conducted with results reported to senior management and all executive levels to ensure effective oversight.

We are reclaiming tailings through an investment of approximately $3 billion in three main technologies:

Following successful field pilots and an ongoing commercial demonstration project, a full-scale tailings centrifuge plant is under construction and on target for a 2015 in-service date. The expected $1.9 billion plant will accelerate the reclamation process by centrifuging fluid fine tailings to create a clay soil material that can be used in post-mining landform construction. The technology involves putting tailings through equipment where a spinning action, or centrifuging, separates out the water. Released water can be recycled back into plant operations. The resulting clay material will initially be used to reclaim portions of our North mine, where it will be capped with soil and re-vegetated.

We plan on placing the clay material from the centrifuge process directly into a depleted mine pit, rather than in thin lifts across a large out-of-pit area. This will significantly reduce the amount of clearing and disturbance otherwise required, while also decreasing hauling distances and related energy use.

Composite Tails (CT) technology combines fluid fine tails with gypsum and sand to create a mixture that is deposited in mined-out areas where the tailings release water and quickly settle. The area can then be capped with sand and soil, enabling the development of landscapes that support forests and wetlands. CT is being used in our former East and West mines, as well as a portion of our North mine which is still in operation.

CT placement in the East mine began in 2000 and was completed in 2011. Sand capping to established closure drainage is ongoing. A 54 hectare fen wetland research project was constructed at the northwest end of this area.

In 2013, we completed the $800-million Composite Tails plant at our Aurora mine on-time and under budget, but challenges with equipment reliability extended the commissioning phase into early 2014. This resulted in no production of CT and zero fines capture from the Aurora plant in 2013. As we worked through start-up issues at Aurora in 2014, we achieved 25 per cent fines capture versus our target of 50 per cent. However, at Mildred Lake, we exceeded our target of 34.6 per cent fines capture and recorded 47.8 for the year.

Water capping involves the placement of a layer of water over a deposit of fluid fine tails to form a lake. Syncrude began researching this technology in the 1980s and has demonstrated its viability through extensive testing. Results show these lakes should develop into natural ecosystems and, over time, support healthy communities of aquatic plants, animals and fish.

We commissioned the industry’s first commercial-scale demonstration of water capping in late 2012 in our former West mine. A comprehensive research and monitoring program will study the performance of the lake as it evolves into an aquatic ecosystem. Research and monitoring will focus on water quality, impacts of the underlying FFT layer, performance of the littoral (shallow shoreline) zone, interaction of biological communities, consolidation of the tailings, development of the shoreline, and the establishment of plants and insects. 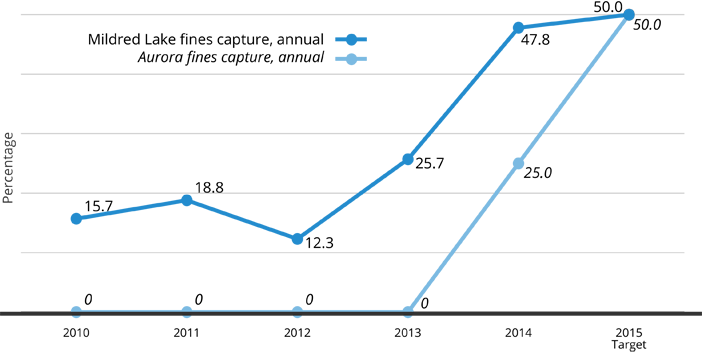 The Sandhill Fen watershed research project, located in a portion of the former East mine, is the first constructed fen watershed in the world. Fens are an important type of peat land found in the boreal forest and this large-scale reconstruction effort underscores our commitment to return the land we disturb to a condition similar to that prior to disturbance.

The fen was built on a foundation of composite tails, upon which soil and woody debris were placed throughout the watershed area. This was followed by revegetation of the upland and lowland areas where locally-collected seeds were spread and native trees and shrubs planted. Species planted include: trembling aspen, white birch, jack pine, white spruce, black spruce, dogwood and green alder. More than 40 species of wetland vegetation were also planted including bog birch, water sedge, arrow grass, rushes and slough grass. Eight multi-year research programs, involving a number of universities, are now collecting data on hydrology, wetland and terrestrial plant response, carbon dynamics and climate conditions.

Early results are encouraging and the information being gathered will improve wetland reclamation best practices for Syncrude and the oil sands industry. A number of wetland plants have been assessed and their performance is comparable to the same plants on a natural site. Similarly, many species of native wetland vegetation are exceeding expectations and thriving in process water environments. In addition, over 80 species of indigenous plants have voluntarily established in the watershed. These include raspberry, strawberry, pin cherry and Saskatoon berry. Rat Root, which is of significant traditional value to local First Nations, is also growing voluntarily.

We are currently researching additional technologies that could be used to supplement existing tailings remediation methods and reduce bitumen in tailings ponds. These include:

Also referred to as rim ditching, accelerated dewatering is based on methods successfully used in the Florida phosphate industry. This technology mixes fluid fine tailings (FFT) with an organic compound called flocculant, which is then placed in a shallow deposit. The flocculant is the same material used by municipal water treatment systems. Flocculant molecules wrap around the clay mineral particles in the FFT, forcing them to settle faster. Initial tests have shown a reduction in FFT volume by 50 per cent in three to five years. If field tests continue to be successful, accelerated dewatering could be an energy- and cost-efficient enhancement to our tailings management activities.

This method, studied since the late 1980s, mixes fluid fine tails with overburden to create a fully functional surface that can be walked or driven on. The resulting material could be incorporated into reclamation activities for mined-out pit areas or out-of-pit landscapes. A demonstration pilot plant was started in 2014.

The thickener technology process involves taking the tailings stream and running it through a cyclone separator. This sends the fines and water to the top. Coarser material sinks to the bottom and is then used as landform construction material. The fines-water overflow goes to a thickener, which adds an organic flocculant that binds the fines together into bigger particles that are the size of a grain of sand. Once dried, the resulting clay material can be used directly in reclamation. Water, forced out of the fines as they are bound together, is recycled back to the plant.

Significant effort continues on improving bitumen recovery, reducing the amount of bitumen in our tailings ponds, and researching future extraction processes that could decrease, or potentially eliminate, the production of FFT. One example is the Non-Floating Bitumen Recovery project (NFBR). Adopted from technology in the coal industry, the project is expected to double our secondary bitumen recovery rates and reduce bitumen in tailings.

* Note: There are currently several differences in the way oil sands operators measure fines and therefore the percentage of fines which must be captured. Our methods, which yield higher fines values, are reflected in the numbers reported in this table. Work is underway through Canada’s Oil Sands Innovation Alliance (COSIA) to standardize measurement procedures.