Extraction of natural resources causes a temporary disturbance to the landscape and, in the case of an oil sands open pit mine, results in the loss of natural productivity for many years. Yet, during that time, significant socio-economic opportunities are generated, with outcomes shared locally and across the country. After mining is complete, the land is returned to a state that is as equally productive as before disturbance. However, stakeholders feel that reclamation in the oil sands industry is not keeping pace with the rate of disturbance. 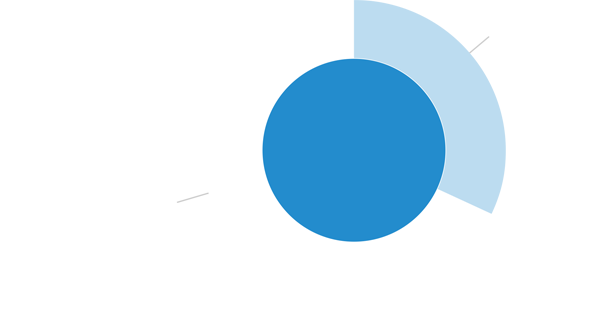 Each year, we set goals towards reaching our end objective of progressively reclaiming former mining areas into forests and wetlands suitable for wildlife, recreation and traditional land uses. 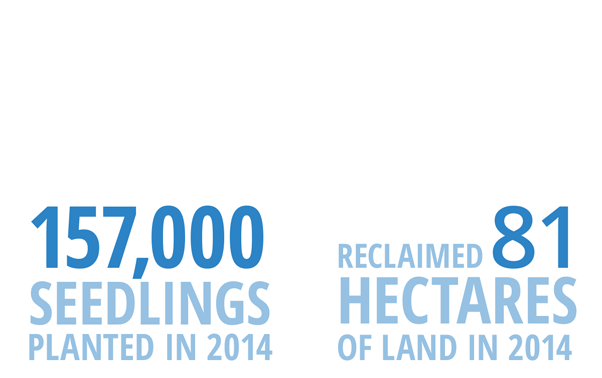 Stakeholders have expressed concerns about the pace of oil sands development and the rate of reclamation. At Syncrude, our policy is to ensure the land disturbed by our operation is returned to a stable, safe condition as quickly as feasible, and that it is capable of supporting biologically self-sustaining communities of plants and animals. Our long-term vision is to create a landscape that sustains an integrated mosaic of land uses that meet stakeholder expectations.

Our reclamation goals are to ensure the final reclaimed landscape:

Syncrude adheres to the Alberta Environmental Protection and Enhancement Act, which requires us to return the land we use to a productive capability equivalent to that of the pre-disturbance landscape. A mine closure plan is submitted to the government every ten years, with a mid-term update; a mine reclamation plan is submitted every three years, supplemented with annual progress reports.

These plans include information on:

Syncrude’s reclamation plan also provides an overview and update on modelling and activities to improve and develop reclamation science, addressing key issues such as landform evolution, water management, salts and their effects on soils, vegetation and surface water, and ecosystem design for establishing natural plant and animal communities. This plan complements our Alberta Energy Regulator Directive 074 submission, which outlines our tailings management plan.

To foster reclamation best practices, Syncrude regularly consults with other operators and openly shares the results of our environmental research through Canada’s Oil Sands Innovation Alliance (COSIA). As well, we continue to work with operators on adjacent leases in order to ensure a viable, sustainable regional closure landscape. Towards this, third party studies are helping to facilitate development of unified landforms across lease boundaries.

Syncrude participates in the Mining Association of Canada’s Towards Sustainable Mining (TSM) initiative, and endorses its Mine Closure Framework. This framework outlines expectations regarding the closure of a mine through eight elements that go beyond legal compliance. This includes a commitment to work with communities to develop closure plans and identify values that will be incorporated into reclamation objectives, and to research and innovate improved mine closure and monitoring technologies. For the complete framework, visit the TSM website.

Each Syncrude owner is liable for its share of financial security regarding the operation’s closure obligation. Information on the Mine Financial Security Program for coal and oil sands companies can be found at the website of Alberta Environment and Parks.

More than 17 million tonnes of cover soil and subsoil material were salvaged, with material being placed directly wherever possible. Material was also re-salvaged from previously reclaimed areas that were being re-disturbed.

Our goal is to progressively reclaim former mining areas as soon as they are available, rather than delay until the end of mine life; areas available for reclamation vary from year to year depending on the mine plan. Cumulative reclamation continues to increase annually.

Reclamation of our former East mine is ongoing. This area is approximately 11.5 square kilometres in size and bordered by Highway 63 south of our main plant site. Reclamation began in 2000, using composite tails as the landform substrate, or underlying layer. Construction of a fen research watershed was completed in 2012, and early results are encouraging, based on a 2013 assessment that found the wetland is comprised of many different types of plants that are performing as well as those in natural sites. The fen will be closely monitored and studied by a multi-disciplinary research team over the next 10 to 20 years. In 2014, the project was recognized by the Mining Association of Canada with its first Towards Sustainable Mining (TSM) Environmental Excellence Award.

Reclamation in our former West mine, began in late 2012, using the method of capping fluid fine tails with water. This area is now capped with water and will be monitored as it changes over time and becomes a feature of the closure landscape.

Further discussion on reclamation of the East and West mines, including the fen research project, can be found in the Tailings chapter.

Whenever possible, we use cover soil placement techniques that promote propagule germination of the native seed bank. This is achieved by placing the soil and LFH (leaf litter/fibric/humic, or the top layer recovered from the forest floor) in winter and minimizing soil handling and traffic. Our practice of rough mulching the tops and stumps of non-merchantable trees adds large pieces of woody debris into the cover soil we salvage and leads to a rough surface which efficiently captures moisture and forms microsites amenable to plants and animals.

Tree planters at Syncrude receive training on the species best suited for the conditions specific to each microsite. Trees and shrubs are planted in a natural looking manner rather than the more common linear rows. Density of planted shrubs is reduced to accommodate natural regeneration from the seed bank where LFH material is placed. Shrubs and trees that have grown naturally are monitored at each LFH and peat placement site. Further planting may be required later in order to meet requirements for species diversity and density.

Syncrude grows its seedlings at the Smoky Lake Forest Nursery, one of the largest in Canada. We work with the nursery to extract, process and store a wide variety of seed pods, cones and other vegetative material collected locally. All the cleaned seeds are registered by original location and shipped to the provincial seed storage facility, which keeps all seeds in a safe storage centre until we need them.

We plant on average about 2,000 trees and between 500 and 1,000 shrubs per hectare on our reclamation sites.

We take great care to ensure our reclaimed land is set on a trajectory for long-term success and self-sustainment. One way is to control erosion through bioengineering. We harvest local willow and poplar while still dormant, and place cuttings as fascines (bundles) on reclaimed areas that have potential for erosion. These species have the ability to shoot roots and stems from cuttings, contributing to the overall diversity and productivity of the landscape.

Weed control is integral to reclamation success and efforts are succeeding. Most of the invasive, non-native species we manage have infiltrated reclaimed areas after being introduced unintentionally from outside the region. To prevent this, workers and contractors are now asked to pressure wash vehicles and equipment before entering reclaimed sites. More than 200 locations are monitored for the presence of Scentless Chamomile, Leafy Spurge, Common Tansy and Canada thistle. Leafy Spurge is now effectively controlled, with patches either reduced in size significantly or disappeared altogether.

Syncrude invested over $107 million on research and development efforts in 2014; of this, over half was directed to environmental projects such as our reclamation research program which  focuses on landscape creation and performance, with emphasis on watersheds.

We also provide financial grants to numerous Canadian and U.S. universities to assist us in advancing oil sands reclamation science. Among those is a new $1.4 million NSERC (Natural Sciences and Engineering Research Council of Canada) Industrial Research Chair at the University of Saskatchewan, sponsored by Syncrude. Over the next five years, Chair holder Dr. Matt Lindsay and a team of students will study byproducts of oil sands mining and processing – such as sand, treated fluid fine tailings and petroleum coke – and analyze changes to these materials after they are used to form reclaimed landscapes. A second NSERC Chair, also at the University of Saskatchewan and sponsored by Syncrude, was announced in 2012. This $2.6 million chair, headed by Dr. Lee Barbour, will provide better understanding of how groundwater moves through reclaimed landforms.

A number of revegetation research activities are also underway. These include studies of tree and shrub species able to tolerate the salty soil conditions that may be experienced in some of our reclamation, investigations into seed storage techniques for boreal shrub species, and experiments related to water use by boreal forests. Building on its highly successful first phase, a second five-year NSERC Industrial Research Chair in Forest Land Reclamation has been undertaken by Syncrude and its industrial partners with Dr. Simon Landhäusser at the University of Alberta.

As part of Syncrude’s 50th anniversary, a special ceremony was held to dedicate and unveil a plaque for the naming of one of Syncrude’s newer reclamation areas. Called “New Beginnings” (“Oski Sechi Kewina” in Cree and “Ne Degóth Honithēí” in Dene), the area has had 730 of its 1,245 hectares already reclaimed since 2005. Since 2009, bio-engineering has been used, rather than traditional reclamation methods, making it the largest area of its kind in the oil sands region. The ceremony was attended by Syncrude President and CEO Mark Ward and various members of the local Aboriginal communities.

1In 2010, the Government of Alberta established a new definition for “permanent reclamation.” For an area to be considered reclaimed, it must be revegetated in accordance with government-approved plans. Syncrude’s prior definition of a reclaimed area was land that, at a minimum, had been shaped, formed, capped with soil and ready for revegetation. This change resulted in the reclassification of land previously reported by Syncrude in our reclamation numbers. We have amended our data to ensure consistency with government reports.

3Numbers include the addition of all newly reclaimed areas, as well as any reclamation losses due to redisturbance that may occur. Every effort is made to minimize disturbance of permanently reclaimed areas; however, by progressively reclaiming, we may reclaim areas that are later required for operations or other reclamation activities, such as soil stockpiling.

Note: Syncrude conducts quality assurance checks of reclamation data in support of the Alberta Government geospatial database submission requirement. This process involves survey and investigation to verify field conditions, interpretation of air photos and satellite imagery to adjust boundaries, and analysis of historic data and classification. This work can result in adjustments to previously reported information. Numbers reflect land classification status as of December 31st, 2014, as reported to the Government of Alberta.